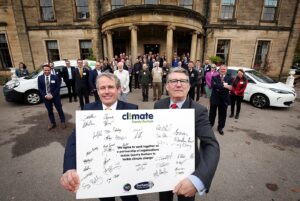 In November 2021, Durham County Council held a conference of partners (COP) where the county’s organisations came together to discuss their decarbonisation actions and plans and the challenges ahead.

All those who attended were given the opportunity to sign the County Durham Climate Agreement – a pledge to work together as a partnership of organisations across County Durham to tackle climate change.

If you’d like your organisation to be part of this and access opportunities for support, such as themed workshops, you can sign up to the Climate Agreement on this page.

For more information on the county’s action to tackle climate change, visit www.climatecountydurham.co.uk

Find out how members of the Environment and Climate Change Partnership’s Climate Emergency Workstream are working to reduce their carbon emissions.

The Trust will reach their carbon neutrality goals through green action plans linked to eight key areas ranging from estates and facilities through to travel and transport and clinical models of care. It has actively embraced sustainability education and engagement with key partners and the wider public, all whilst adapting to the health implications of climate change.

The Trust’s vision aligns with that of Greener NHS, NHS England and ‘net zero’ and engages with NHS England sustainable procurement projects. It also aims to promote healthy lifestyles and diet, for example lower meat consumption, through collaborative working within the NHS and the wider community.

*Scope 1 emissions are those which the organisation directly produces for example from company vehicles, scope 2 covers emissions from electricity that the organisation has purchased and scope 3 covers more indirect emissions such as those from business travel and investments.

The County Durham Economic Partnership (CDEP) helps businesses to develop their own green plans through education and engagement.

A CDEP member organisation has conducted nationwide research focussing on small to medium enterprises (SMEs) and their knowledge of green initiatives; findings included that only one third were aware of the net zero concept and 71 % didn’t know where to go for energy efficiency advice. However, 60 % stated that environmental impact was their second largest priority to customers (after cost) therefore there is a market premium for being ‘green’!

Partly informed by these findings, CDEP are actively working with SMEs in order to signpost business opportunities. For example, a webinar was held to support local SMEs in applying from the Green Homes Grant. CDEP are involved in Durham Works which is a £39 million European Social Fund project working to get young people who aren’t in education or employment into further education or work. CDEP are also working with those in education through the Durham City Incubator which encourages students to stay in the North East and set up businesses.oth Durham Works and Durham City Incubator promote green careers and education pathways.

The Business Energy Efficiency Project (BEEP) is another, increasingly successful, project involving CDEP which provides auditing and energy efficiency advice to reduce environmental impact through financial incentive. For example, a local company, ACE motors, saw a 64 % reduction in their monthly energy bills once they had put energy efficiency measures in place as directed by BEEP.

Looking forward, CDEP are working on a plan for the new shared prosperity fund which is to replace the European Strategic Investment Funding as it comes to an end.

The Environment Agency (EA) are a non-departmental public body, sponsored by the UK’s government Department for Environment, Food and Rural Affairs (DEFRA) for the enhancement of the environment in England.

Tackling the climate emergency is central to the work of the Environment Agency. Their 'Climate Ambition' is to create a net zero nation that is also resilient to climate change. They are tackling their own contribution to climate change by driving down their own emissions to net zero by 2030. Through regulation of key industrial sectors and by administrating the UK Emissions Trading Scheme they support the government’s ambition of a net zero nation by 2050. They also play a critical role on the front line in helping communities to be better protected against climate impacts including rising sea levels and extreme weather events.

The Agency's Net Zero Roadmap sets out the steps they will need to take to meet Net Zero by 2030. This includes cutting emissions by 45%, including emissions from the construction of flood defences which makes up half of their overall footprint, and working to absorb or offset remaining emissions through projects that achieve multiple wide-ranging, long-lasting benefits for people and nature.

How we all respond and adapt to the climate emergency is also absolutely central to the Environment Agency's work, and their recently published adaptation report sets out actions we will all need to take to respond to the reality of climate change and create a more resilient future. A key theme of adaptation will be the need to think differently and collaborate across all sectors. We know that significant climate impacts are inevitable but by working closely together with others we can prepare for those impacts to live differently in a changing climate which is why the Agency is pleased to be a member of this initiative.

The Federation of Small Businesses (FSB) is a not-for-profit and the UK’s largest business support organisation, representing small to medium enterprises (SMEs) and the self-employed across the UK. Members receive an exclusive package of great value business support services, and crucially, a powerful voice in government both at local and national levels. FSB aims to help smaller businesses achieve their ambitions.

FSB encourages its members to become more environmentally friendly and participate in initiatives such as the SME Climate Pledge to reduce their carbon footprint. In addition, practical support and guidance is available to small businesses, both members and non-members, on the national Sustainability Hub. This hub provides examples of green projects undertaken by other businesses, educational resources covering topics such as the importance of going green, and a useful jargon buster.

As an organisation, FSB continually monitors its own practices and consciously makes efforts to consider the environment in all its activities. For example, FSB has invested in virtual meeting software and encourages staff to undertake meetings virtually, where possible, in order to minimise travel and thus reduce its reliance on harmful fossil fuels.

Keele University is a public research University in Newcastle-under-Lyme, England with around 10,000 students. Professor David Healey, is founder of  Smart Grid Solutions Limited and is the representative for the University on County Durham's Climate Emergency Strategic Advisory Board. As an independent consultant, he advises a number of Government and commercial entities on the energy supply industry transition including Keele’s ground-breaking climate projects outlined below.

The University has a climate action framework in place which sets out a whole university approach to reach their net zero by 2030 goal; how they will reach said goal and tackle the climate crisis through research, education and by lowering their own carbon emissions.

They aim to achieve their net zero goal by producing their own low carbon energy on site, for example through the installation of solar photovoltaic arrays on the rooves of their buildings, reduce their carbon emissions through education and engagement of staff and students and, where possible, remove carbon dioxide emissions from the atmosphere. Removal of carbon from the atmosphere will be done by maximising the use of their natural environment to increase the drawdown of carbon and maximise its long-term storage in our plants and vegetation.

An example of Keele University’s work on a local sustainability project is their HyDepoly venture. HyDeploy is the UK’s first live pilot to inject zero carbon hydrogen into a gas network to heat homes and buildings. As hydrogen contains no carbon, unlike natural gas, it doesn’t release carbon dioxide or other carbon based greenhouse gases when burned and therefore is far greener! The second phase of this project is now underway investigating a hydrogen fuel mix in homes in Winlaton, Gateshead. This project will give information about the viability of hydrogen for heat in the UK.

A further example of the University’s ground-breaking work is their Smart Energy Network Demonstrator initiative. This project is a European first and involves a to scale ‘living laboratory’ to investigate energy generation, distribution and forecasting for Keele University’s campus. The aim of the project is to deliver a better energy management system by trialling innovative energy use and generation in their laboratory model.

Lanchester Wines is a sustainable wine business. They believe that every business has a duty of care to minimise its impact on the environment, which is why they and the wider Lanchester group of companies, which includes Greencroft Bottling, has worked tirelessly over the last decade to ensure sustainability is at their core.

There is, unfortunately, no ‘one size fits all’ solution when it comes to sustainability and so they’ve invested considerably to identify which changes they can make to lessen their effect on our planet.

Their business’ greatest opportunity to make a change is through minimising their reliance on fossil fuels. As such, they’ve invested over £8million in renewable heat and energy generation at sites across the North East of England and today their business is powered almost completely by renewable wind and solar energy.

As a business, they continue to make choices about their long-term sustainability which goes above and beyond both legislation and common practice. They are pioneering world-changing heat pump technology using water from disused mines at their warehouses in Gateshead

This technology not only enables customers to further reduce their carbon footprint, but also revolutionise how clean technology may be used in former mining areas across the world.

They understand saving energy is just as important as generating it and have implemented a number of practices across their estate:

Northern Powergrid is the electricity Distribution Network Operator (DNO) responsible for the network that takes electricity from power stations and smaller generators to 3.9 million homes and businesses across the North East, Yorkshire and northern Lincolnshire.

To act as an enabler of net zero targets across their region and deliver the outcomes customers want to see, Northern Powergrid has proposed to develop an increasingly flexible and innovative approach to running and investing in the network that opens up all the credible pathways to decarbonisation as affordably as possible, being on track for net zero by 2050 or sooner. This is expected to facilitate the uptake of up to around 831k electric vehicles and up to 251k heat pumps by 2028.

For their own business, Northern Powergrid have set a target to be on a path to carbon net neutral operations by 2040 and are in the process of their own net zero target being verified by the science-based target initiative.

The Coal Authority is a non-departmental public body sponsored by the Department for Business, Energy & Industrial Strategy; they are responsible for the maintenance and development of the now non-operational coal mines and the land they lie underneath. They aim to achieve their sustainability goals through offsetting their emissions and investigating innovative circular economy projects.

The main source of carbon emissions produced by the organisation comes from pumping some 122 billion litres of water from disused mines; however, these emissions are offset through their 1.6 MW solar photovoltaic (PV) installations which they hope to expand in the future.

Alongside the use of solar PV, mine water heat is being investigated and implemented across the region in collaboration with Northumbrian Water Group and Lanchester Wines. This will recover heat from warm mine water which will then be fed into local heating networks thus reducing local reliance on fossil fuels for heat.

A circular economy for solid waste from the mines is also being explored in which waste such as ochre, a natural clay earth pigment, can be recovered and dried and used for soil improvement. Improving soil quality can increase viability of natural environments surrounding the mines and increase biodiversity which is a key priority for the county.